Many society members and decision makers might wonder what the interest of investing in forming and enabling values would be. This is a legitimate question but to which the answer is as diverse as the audience of values themselves, be it individuals, families, educational institutions, workplaces, societies or the country as the umbrella community of societies.
It is a worth noting addition to assert the significance of values and their numerous returns on individuals, families, educational institutions and the nation at large. No one denies the benefits of values or fails to appreciate their returns to their personal interests. Hence, the answer that requires elaboration on is to the employers and corporate leaders. This sector wants an evidence of material benefit since they invest money in forming, assessing and enabling the value systems.
In his book titled Playing for Keeps, Frederick Harmon stated, “Core values will appear like gold nuggets on the ground”. He believed that business owners and shareholders might consider and call for implementing the corporate values in their organizations. However, when they review the performance of their managers, they see only financial reports and profit and loss statements.
Money is indeed a tool of measuring success. Nevertheless, these numbers could hide the values that justify the demise or rise of these same organizations. Values are much like gold nuggets; highly precious but requires mining. This is the point we will be stressing in relation to the key issues of concern to a decision-maker as follows: 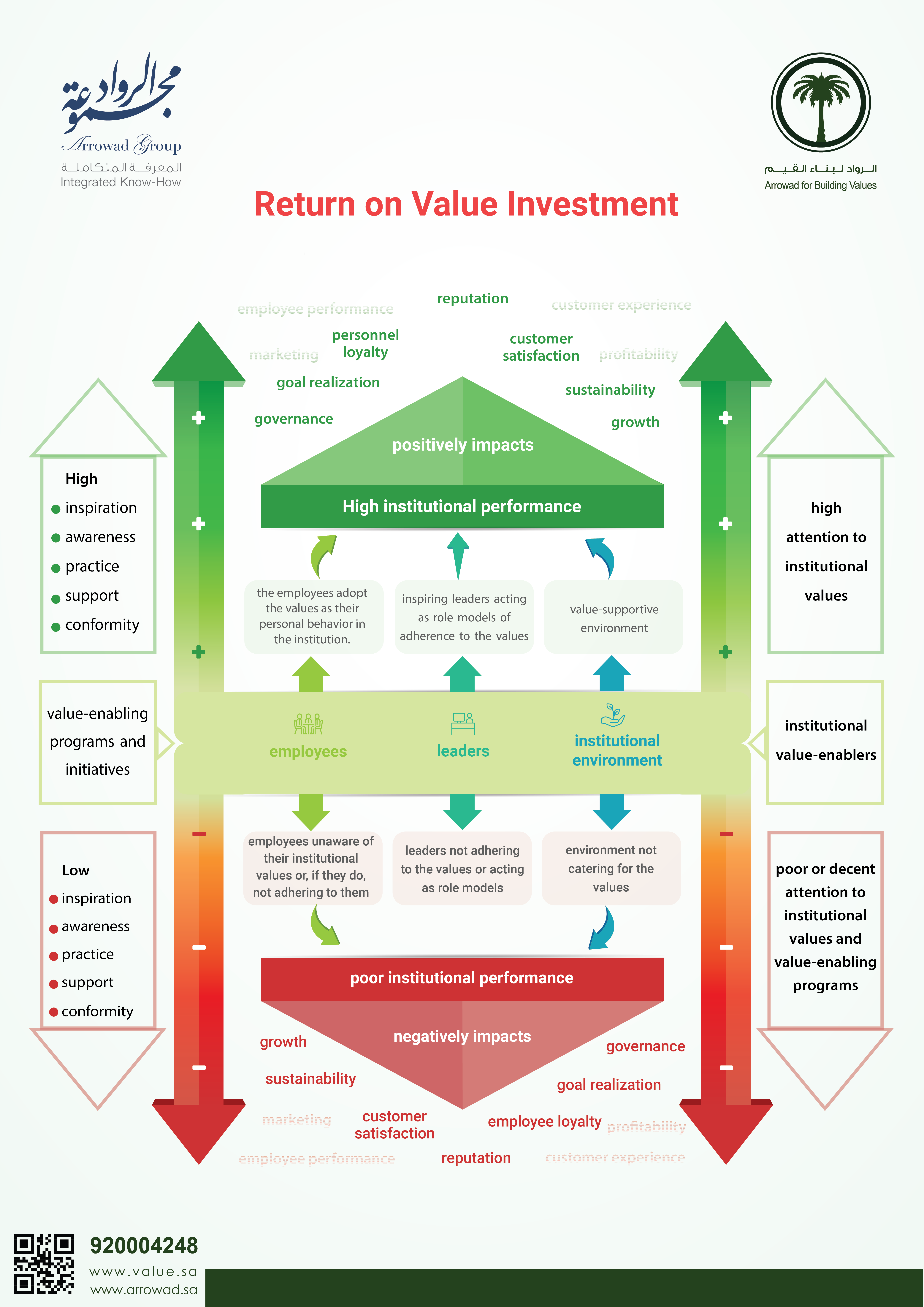 Governmental organizations and enterprises are keen on imposing rules and regulations. They effectively, thoroughly and precisely enforce governance over internal administrative and financial operations. All these efforts are aimed at improving performance and curbing financial or managerial corruption. This effort in turn and undoubtedly facilitates financial or managerial control. By definition, governance refers to the value of integrity, ethical and effective leadership practices and most importantly ethics and values.
In spite of that, some experts and legal professionals consider that excessive imposition of rules and regulations is counterproductive and produces a wider loophole of financial or managerial corruption.
It is well established that codification and governance are a pressing need and an essential strategic option for organizations, yet solely relying on it does not suffice. A system is not a sun shining on all open spaces. No matter how immaculate and strict the system might be, violators will find a loophole to cover them. Indeed, as the saying goes, if you want to violate a law, study it well. Hence, the solution is to first enforce a value system as it represents the personal laws of individuals. This system controls the personal behaviors even before the external force of law and governance regimes does. This is just one return on investing in values and deeply enforcing and integrating them into organizations.

The corporate values oriented to the behavior of organizations’ leaders and employees have substantial and direct effect on their work performance, decision-making and relationship with line managers, peers, subordinates and clients. In addition, values can lead to better integration and coherence among the organization’s members. Values drive them to exert efforts for realizing the desired corporate goals .
Upon discussing the importance of corporate values, it is imperative that we learn how these corporate values influence an employee’s performance. According to the research conducted by Gorenak, M., and Kosir, S. (2012), institutions that adopt recruitment criteria including conformity between their corporate values and personal values are more likely to succeed. This is attributed to the fact that employees in this case enjoy higher job satisfaction. In another similar study published by Gregory, K. in 2009, it was concluded that some employees realize that conformity between corporate and personal values is more important than their own salaries.
On the contrary, lack of conformity and harmony between corporate and personal values results in employees losing focus on their jobs as well as loyalty to the organization. This, in fact, is economically inefficient. A study by Gallup revealed that only 13% of the international workforce are loyal to their institution while around 20% of North American and European employees are not being effectively loyal to the workplace. These studies also estimated that lack of effective loyalty costs USA alone approximately 550 billion USD each year. Lack and absence of loyal is manifested in many forms the most noticeable of which are absence from work, sick leaves or even attending to work while sick just to be present not to actually work.
A study conducted in Canada established that 25% of sick leaves taken by the workforce are for fatigue rather than being sick. Furthermore, mental disorders cause an estimated loss of 3% to 4% of the Gross Domestic Product in Europe and North America while amounting to 110 billion GBP per year in the UK. Such disorders are manifested as absence from work, decreased productivity and increased medical care expenses.
Specialists reckon that the basic relationship between believes, values and behavior can manifest itself in the form of fatigue. In some companies, fatigue could lead to an overall decline in performance and efficiency. Fatigue is not limited to physical tiredness caused by physically demanding tasks. It is more likely to be an expression of psychological stress experienced due to dissatisfaction with the corporate values in the workplace. Medicine, psychology and management consider that fatigue occurs when individuals conceive of and interpret the environment differently in light of their ability to cope up with it. Thus, fatigue exists when the environment poses a threat to individuals.
Therefore, enabling values (as referred to earlier) is an elevated strategy. On the one hand, it achieves conformity between personal and corporate values; thus ensuring employees’ loyalty. On the other, it emphasizes enabling, as a strategy, for involving the corporate employees in the value acquisition process, formulating the behaviors and procedures and particularly generating self-motivation. In general, employees exert extra efforts when they are treated with respect, listened to, consulted and involved in business management.
Overall, productivity rises when employees feel satisfied and content by about 12% in total returns. It is no secret that content is the product of managers’ attention to and care for their subordinates. Besides, employees feel affiliation and collective identity when their personal values are the same as their employer’s. This fact was proven since the 1930s in what is known as the Hawthorne effect. It was further evidenced that this affiliation noticeably improves their performance. In a 2014 study conducted by www.bayt.com (the largest online recruitment platform in the Middle East) on workplace ethics and values, it was found that 98% of professionals of the Middle East and North Africa think values in the workplace to be quite important.

Studies indicate that the majority of high caliber and experienced professionals prefer businesses that cater for and support values, adopt a declared explicit value system and control the practices and behavior of employees accordingly. In its index, Great Place to Work, an organization concerned with benchmarking workplaces around the world, named Hilton as the number one on the Best Big Companies to Work For® list. The top qualifying reason for this award was that 97% of Hilton employees believed that the management is genuine, truthful and ethical in their commercial practices and trust in them to perform well without close control. On that basis, the findings claimed that 98% of the company’s personnel are proud to work for it.
Studies revealed that some companies in the UK are having a hard time headhunting since they did not reassert the corporate values when interviewing to potential recruits. Other studies found out that the values of employers form the perceptions of current, past and potential employees when it comes to working for these companies.
When a company possesses and adopts a value system, it effectively differentiates itself from others. Such a company will be known for its outstanding employer who attracts talents to work for him/her.
A LinkedIn study concluded that 36% of the respondent human resources and recruitment professionals stated that their values are missing from their companies’ websites. The report further revealed that several companies fail to promote their vision, mission and values during recruitment. 61% acknowledged that they do not mention the corporate values during an interview while only 27% said they posted them in the job advertisements. This issue can be traced back to a knowledge gap. One out of 10 human resource specialists acknowledged that they are unable to express their companies’ values. One of each five respondents also claimed that the human resources and marketing departments of their companies are not collaborating well, or at all, on promoting the trademark before third parties.
Robert Bond, the business owner of Bond Williams, commented that “It is evident that the values of a trademark are crucial to recruiting and employing talents”. This comes as no surprise. However, through our experience as a recruitment agency, it is of paramount importance that companies make sure they themselves manage these basic values to reflect the true nature of the company’s culture and inspirations for the future. In our experience, companies that retain the top-level talents are those who not only explicitly declare their trademark values, but also cater for and precisely exhibit these values in all aspects of their daily operations.

When all the employees of an organization are governed by one value system, they develop more loyalty and dedicate themselves to work. As a result, the organization gains momentum in the market and achieves further growth. The personnel have personal interest in the company; hence, they continuously generate positive attitudes towards it. They take responsibility for work, are keen on doing their best and promote a positive image of the company.

Organizations that have an effective value system gain massive opportunities to maintain their competitive edge compared to their counterparts in the marketplace. They are more capable of coping up with the nuances in the job market. That is why they can sustain their creative performance and minimize risks of loss, which might even cause bankruptcy.

A concern of corporate leadership is that the corporate values need to be incorporated into the strategic plan. Leaders believe that this system is an integral part of the strategic plans regardless of the attention it might receive later on. A leader could bring massive gains out of enabling the values as an essential and critical element of the corporate culture steering the operations within the organization. In addition to all the major positive returns added to a company’s interests, employers and managers can still produce much more gains as follows:

When an employee adheres to the corporate values as they are manifested in his/her behavior and practices, he/she brings a number of long-term and strategic gains as follows:

Promoting the Trademark Image and Sales

Companies that pay interest in forming and preparing the requirements of corporate value systems incline their employees to represent and adhere to the system. While an organization endeavors to assert conformity between its explicit values and personal values of its personnel, it positively influences the workplace making it a safe environment characterized by organizational compliance, job satisfaction, teamwork, motivation and minimized pressures of work. This further generates a positive influence on the corporate culture in which values and traditions are exalted, loyalty and proficiency grow and governance prevails.