Meaning of Value as a term and relevant terminology

My end goal for this value study and research is to develop a new philosophy, genuine theoretical frameworks, curricula and practical manuals (transforming the theoretical frameworks into real-life outcomes) and hands-on toolkits (which help individuals and influencers alike instill their values and the values of their sponsors or audience). Our goal guides us to understand and define what a value is as a term and identify the value-related concepts.
Below we will be covering our understanding and interpretation of values as a term, the value systems and a number of key concepts as a foundation for a solid understanding of values (by which value scholars and researchers adopting our methodology can be guided).

A value is an abstract concept referring to the ethical or guiding beliefs adopted by an individual, a society or nation. It comprises preferences that evolve into driving principles which guide behavior, situations and choices.

A person, group of people or artificial entity (i.e. parent, teacher, curriculum, manager, social leader and ruler) who has power and authority or who manages the supporting environment (i.e. family, school, institution, society or nation) and is legally responsible for instilling and enabling the values among them.
This means the first influencer over an individual in his/her life cycle is parents or guardians. Growing up, the influence circle extends to school in general where teachers and the curricula exert a direct influence on students and play an essential role in forming a student’s educational value system and in developing the cognitive dimension. During the course of learning and teaching, daily influence takes place intentionally or unintentionally through the curricula studied by students and through the words and actions of teachers. 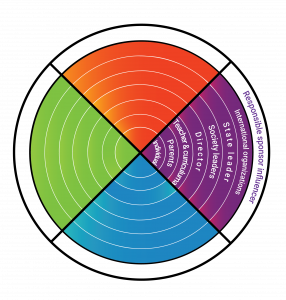 In addition, the personal, social and national values are born in this phase.
Afterwards, the individual joins the job market whether as an employee for the public or private sector or for a non-profit organization. In this setting, the employer or manager (i.e. the influential sponsor) plays a significant role in forming the Corporate Value system (as evident from the extent to which that individual acquires the workplace values).
Broadly speaking, society leaders play an important role, whether deliberately or undeliberately, in forming the values of their society members.
A person remains under direct influence and patronage of the country (including its institutions, systems and policies) as the wider umbrella that directly contributes to forming the national value system of its citizens.
Eventually, international institutions influence the citizens of their member states.

An irresponsible influencer is an individual or artificial entity that influences people or their institutions and supporting environments yet has no authority over them nor is legally responsible for them. They include opinion leaders around the world, social media activists and civil society organizations. Irresponsible influencers effectively contribute to communicating and enabling the value culture among their audience by spreading certain values. An audience member could include a child, student, employee, community member or citizen who fall under their influence throughout their life cycle in all supporting environments in which the audience are found as illustrated in the figure (2). 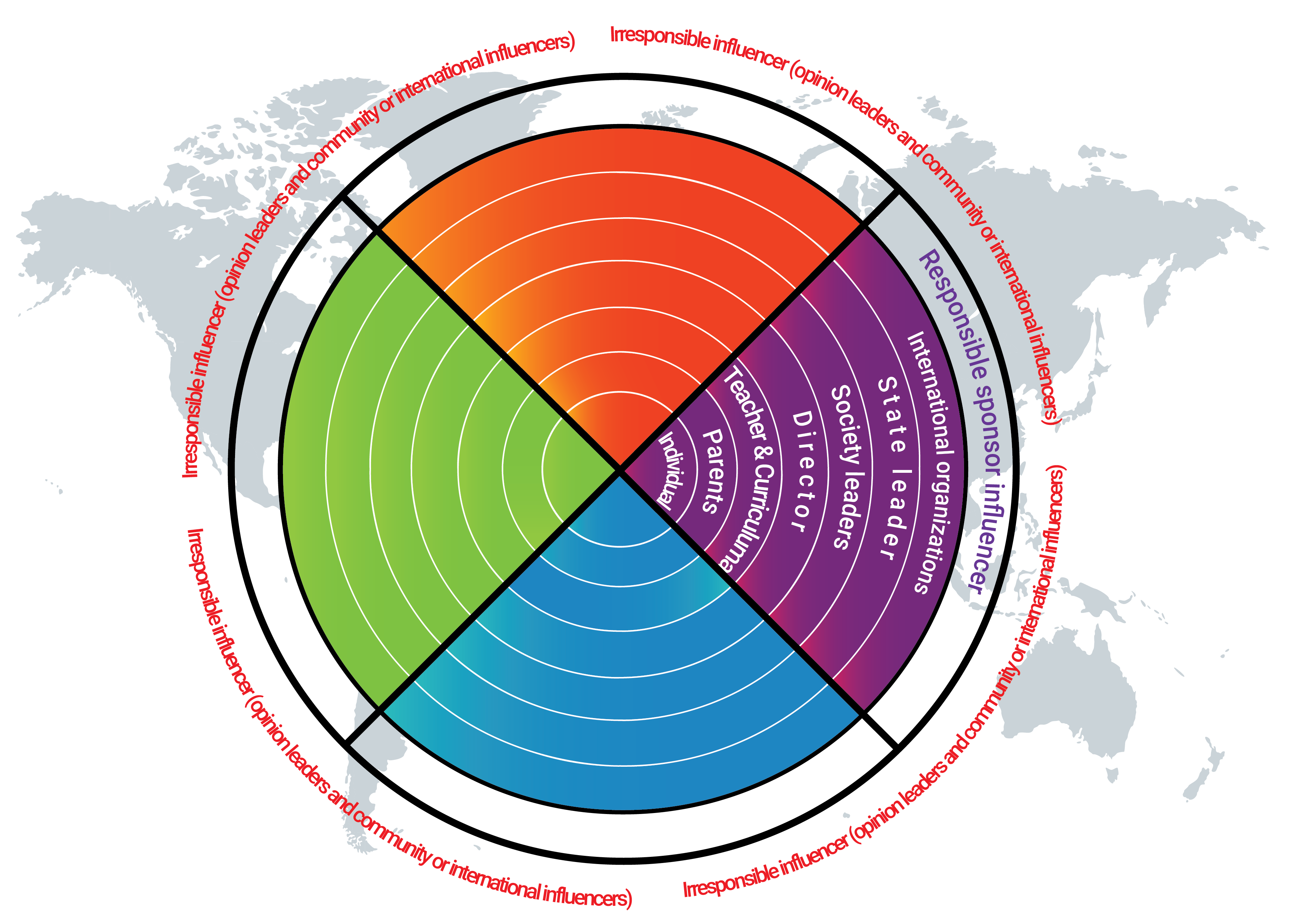 An audience member is any individual responsible to for or under the influence of responsible or irresponsible influencers. The audience can be found in numerous conditions and include children, students, employees, society members and citizens. The form of influence can vary based on the authority of influencers and the type of audience’s environment. The figure (3) demonstrates the types of audiences. 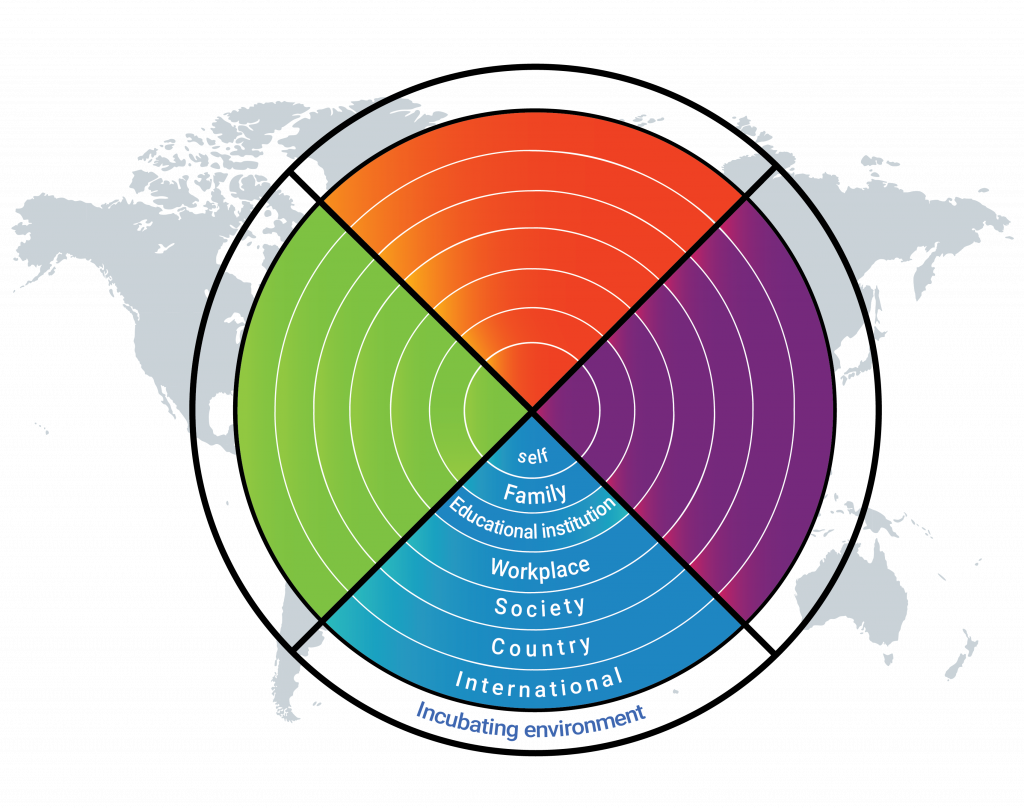 III. Educational environment
Including all stages of education, i.e. kindergarten, school and university education as well as all forms of training and educational institutions.
IV. All types of institutional workplace environment
A workplace is an artificial environment characterized by adoption of a well-defined system, has a leader that regulates the relationships and operations and aims at achieving certain goals.
V. Societal environment
Regardless of its size, a society may comprise a certain district, a city community or an ethic ethnic community. Furthermore, several societies may exist in one country or extend across multiple nations such as the Muslim and the Arab societies.
VI. National environment (Nation)
A nation is the home country to which a citizen is historically connected and to which citizens have a sense of belonging and is where the national identity of citizens is born.
VII. The World environment
The world is the universal inclusive environment in which all humankind live. This environment is comprised of international organizations and people all over the world. It refers to the environment in which irresponsible influencers enjoy carte blanche and exist most commonly in knowledge spaces, mass media, social media and any other platform from which they can broadcast their opinions to the whole world. The following figure (4) illustrates the types of supporting environments while the table (1) lists the categories of individual-supporting environments and the characteristics of each.

A supporting environment is an environment that provides the requirements for adoption of values and provides all possible situations to instill them among its individuals.

In his Dictionary of Behavioral Science, Wolman B. B. 1989 defined a value system as a set of elements that follow a specific scheme, characterized by interrelationships and perform a particular task for individuals.
According to Rokeach (Braithwaite, V. A., & Law, H. G.), it is a set of values.
On that basis, it can be said that a value system, generally speaking, incorporates a set of interrelated values that function as one unit to fulfill an end goal. Value systems can be as complicated as the number of values they incorporate.
Incubating environments vary and consequently do value systems. Later on, we will be elaborating on value systems.
The figure (5) illustrates the types of value systems. 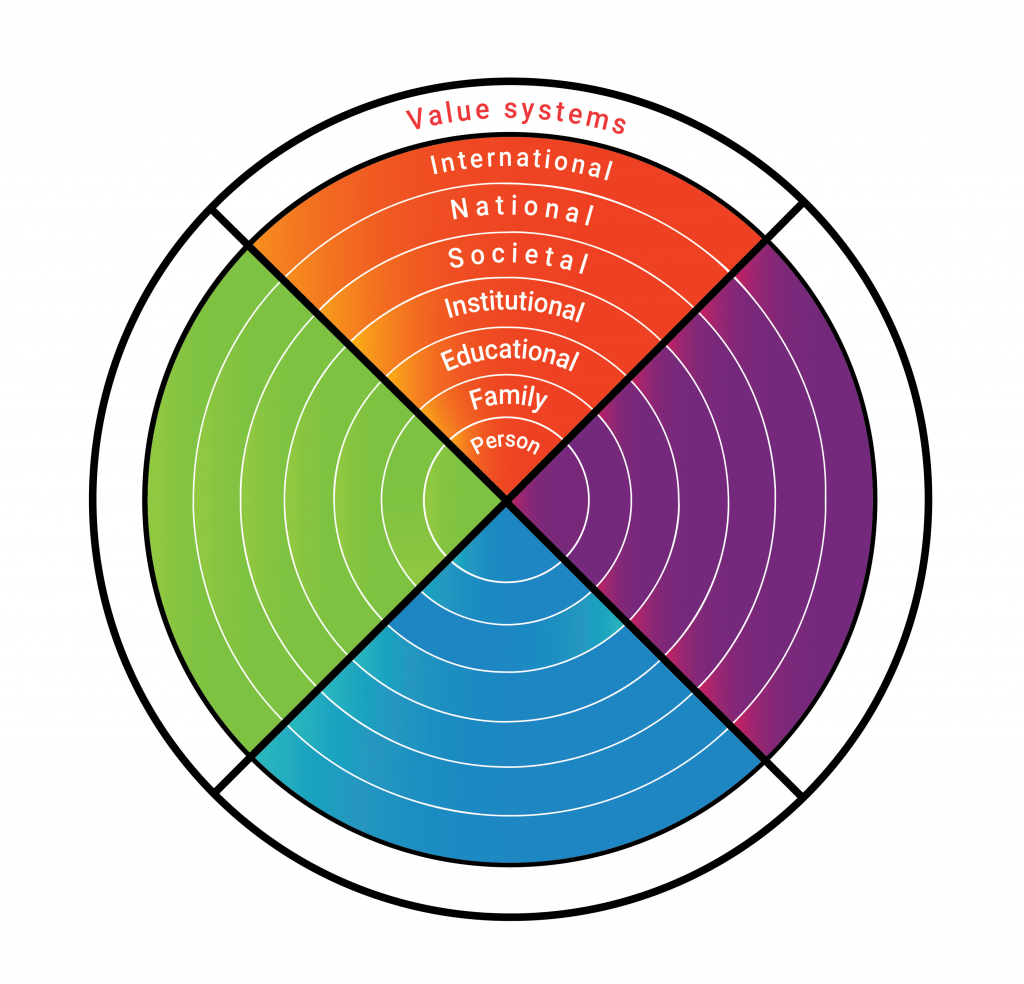 There is a plethora of business-related terminology? terminologies interrelated to values, three of which are common but similar and often confused as indicated below:

Furthermore, these terms are incorporated in several documentations including: 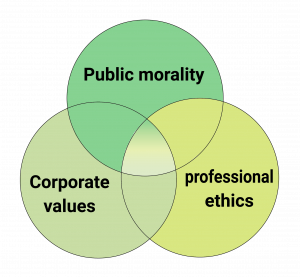 Terminological speaking and for the past century, no reference on values can be found in the philosophical, ethical or administrative literature as elaborated on when covering the perplexing terminology. However, references can be found on the nearest term in meaning, namely ethics. Several researchers traced back ethical references to as early as the ideologies of most ancient Chinese, Indian, Greek and Pharaonic civilizations to name but a few. All these cultures exhibited references to idealism, realism, religious beliefs, myths and polytheism (worshiping multiple gods to whom they attribute good and evil and state the ethics of each) and noted that ethics are relative or absolute.
Despite using the two terms interchangeably, Hassan Malkawy, 2016, intensively discussed a summary comparison between ethics and values presenting the ideologies held by some western philosophers including Machiavelli, Friedrich Nietzsche, Max Weber, Descartes, Francis Bacon and Auguste Comte. Malkawy concluded and asserted that controversy over the origin of ethics and values can still be traced back to the ancient philosophies, which did not agree on a single reference. Concerning Islamic ideology, there is a constant reference to religion and religious jurisprudence.

Our Interpretation of Value References

Looking back at the perplexing terminology that caused overlapping ethics and values, reiterating our belief that ethics are a type of value and in light of the differences listed earlier between values and ethics; we must distinguish the references of values from those of ethics just as we do with the two terms. In principle, ethics originate from common sense with which every human is born and which was delivered in the messages of the prophets including that by the Last Messenger, peace be upon him, who said “I was sent to uphold and complement the best of ethics” as narrated by Ahmed and others. The premise is that regardless of the religion or culture or even in case of atheism, the reference of ethics is always common sense and natural sound instinct. Values, however, are generated by their upholding sponsors irrespective of their type (i.e. parents, teachers, managers, societal leaders, rulers and international organizations). These influencers are the points of reference for the values they adopt, communicate and instill into the audience of their environments. A sponsor embraces a set of values relevant to his/her environment guided by personal references, which we believe are often either of two references, namely common sense or material benefits. Subsequently, the sponsor assumes the environment values in light of either of the two references. Based on the goal he/she wishes to fulfil in the environment, all the components of the value system in the sponsor’s environment may be referenced solely to common sense or solely to material benefits and maybe to both ends. For instance, honesty is a corporate value referenced to common sense while creativity is utilitarian value in essence and reference. A value could be attributed to two consistent references. For instance, customer satisfaction as a value is based on common sense and material benefit.