Scholars and theorists did not agree on a common definition for values. Similarly, opinions on value classification vary as some categorize them into groups, while others into types, domains or systems. In light of the standards assumed by researchers, scholars and others interested in value classification, we will be reflecting on our understanding of this subject matter.

Classifying values into types and domains is based on numerous principles in terms of the stances taken by value researchers. On this basis, they developed a value classification according to specific standards. Eduard Spranger (Germany 1928) evaluated values in terms of their subject matter or domains and their relevant activities. Accordingly, Spranger classified values into six orientations, namely theoretical such as being quick-witted; economic such as competition and productivity; social such as volunteering, selflessness and loyalty; political such as authority and power; religious such as rituals and belief in metaphysics; and aesthetic such as love and colors . White M. G. followed the same approach and classified values into physical, social, personal, practical, cognitive, hedonic, recreational, and safety.
As for Smith, F. Seymour, 1964, he believed values are either a goal or a means. He believed that values consist of terminal values, which are considered by society as a goal in itself, or instrumental values that are not desirable goals but rather means to realize other more significant goals such as working for a better future and quality life.
Candy capitalized on public and personal values meaning that some values are public while others are social. The first include the values adopted by all society members including equality, freedom, cooperation, consultation and other desirable social values as honesty and integrity.
Specific or personal values relate to a specific group or community. These values represent an individual and are not necessarily common among the society such as aspiration and perseverance.
Another classification was assumed by Abu Aleneen, 1988, who sorted values based on permanency and temporality. According to him, temporal values include fashion-related values, for instance, while permanent values are constant, transferable between generations and upheld by society over time. The latter often pertain to sacred social beliefs, religion and victuals.
Another classification looked into compulsion over individuals and communities. In this sense, values could be compulsory when they relate to the interest of both individuals and society. These values are social, ethical or religious and are known to be sacred such as rites. On the other hand, preferential values are unreligious. Society promotes preferential values and do not condemn those who fail to adhere to them. Values could also be ideal when they reference the highest goals, as society believe these are unattainable and partially attainable. Nonetheless, they play a major role in guiding behavior.

Our Classification of Values

Each of the previous classifications are based on theoretical principles, thus we believe they are theoretical classifications. Even though we include these in our own classification, we do not solely rely on them to develop our value classification or value-enabling processes.
Our focus is on hands-on application since the goal of this study is not limited to extending the theoretical aspect but rather investigating the methods of creating and enabling values. On this basis upon classifying values, we consider the environment in which value adopters live including the personal environment and up to the whole world environment. Hence, our classification is comprised of seven value types as follows:

It must be noted, however, that values cannot be restricted to a single classification. Classifying a value is dependent on the core of the value and the purpose it serves for its adopters.
Looking at the studies on value systems around the world, it is evident that estimating the types and names of value systems is not an easy task. This can be attributed to the fact that researchers adopted diverse standards and principles to classify and name value systems much like the case in the classification of values.
Moreover, a certain set of values might carry several names. For instance, the values of order, generosity and compassion are collectively called the disciplinary or educational value system. This same set is also attributed to the values of godliness, diffidence, modesty and patriotism. On the other hand, a value system might be named after a single value.

Our Classification of Value Systems

This system includes the set of values voluntarily adopted by an individual who becomes the sponsor of these values. The system is often virtual in the sense that the person does not express it or count its components but believes in it, defends it and behaves according to it. The number, ranking and type of values in each system varies from one individual to another based on the personal interests, goals and priorities. The system comprises several values of different names including ethical, economic, aesthetic, theoretical, social and political values etc.

This system does not relate to the value system adopted by the administration of an educational institution, otherwise it would be considered a corporate value system. The educational value system incorporates the learning and teaching values, i.e. the values relevant to and aimed at students including the values that the educational institution instills into students whether academic values or even societal, national and international values. In this context, teachers and curricula play the role of the influencer that directly presents the values or integrates them into academic syllabi and activities.

This type of value system is the most common subject of study and research. A corporate value system is a set of values formed in line with the vision and mission of businesses and service providers, i.e. the public and private sectors and the non-profit organizations. The system caters for the corporate strategies, aspirations of leaders and employers. It further ensures conformity with its activities to realize the goals and maintain sustainable development and improvement. Corporate leaders are responsible for instilling and enabling the corporate values into their employees.

National values are those adopted by a ruler. The system represents patriotism and loyalty exclusively to one nation. It drives individuals to love their country, support its interests and authority and feel national pride. National values are selected based on national references then monitored and approved by the country’s sovereign authorities. They are broadly communicated and taught at all educational stages.

A value is mostly an abstract concept. Hence, a better understanding of values is possible by means of identifying the complexion and unveiling the abstraction element of values.
Most studies presented a common belief that there are three overlapping and interactive dimensions of a value irrespective of its type. These dimensions are: cognition, attitude (affection) and behavior while belief can be considered the fourth dimension. It is imperative that these dimensions are taken into consideration when interpreting values and highlighted during the value forming and enabling process. Here is a quick look at each of the four dimensions: 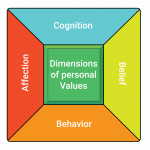 This dimension is concerned with the mental and cognitive processes and with how a person perceives and interprets a value. It considers value a consciousness understanding and cognitive addition that requires information and elaboration. Consequently, this is how an individual acquires and understands a value. The cognitive dimension is responsible for the mental skills an individual uses to learn such as comprehension, analysis, evaluation, memorizing etc. For instance, a person learns that truthfulness is a condition in which words conform to reality and that there are types of truth including true words and true deeds. The individual also learns the merits and fruits of truthfulness. The cognitive dimension is implicit, hence can be noticed only through a behavior reflecting it.

This dimension represents the affective aspect of values. When a person is convinced and committed to a value, it becomes a common sense to him/her. Then, the value is interpreted into preferences and choices based on which the individual prioritizes among alternatives and behaviors. Consequently, that person reacts positively towards conditions and people who stand for the value. On the contrary, he/she would react negatively when presented with conditions or people opposing the value. For instance, an individual has a tendency to always be honest and is internally driven to behave in such a manner even though lying might seem of immediate benefit. In this context, the individual appreciates and respects honest people but condemns liars. The value in implicit yet clearly exhibited in the form of behavior.

This dimension manifested itself as a firm belief in a value. The belief remains constant and fervent regardless of the changing and diverse situations. In some cases, a value might not be manifested to realize immediate or direct benefits. In others, belief may lead to dogmatism in which a value cannot be objectively assessed. This dimension is implicit, thus can only be noticed through behaviors representing a value.

The outcome of the three other dimensions (i.e. cognition, affection and belief) is behavior. At this stage, a value translates into explicit and diverse preferences, choices, practices and behaviors. An individual might behave in favor or appreciation of a value or refrain from it. To do so, he/she adopts behavioral standards, which are generated by values while any contradictory behavior is changed or receives an adjustment. This is the evident dimension of a value. The figure (6) illustrates the dimensions of individual values.

Now that we have covered our principles in understanding values, elaborated on the value-related terminology and classified value types, system and dimensions; it is time to focus on our interpretation of the value system itself.
A value system stands for the mechanism and the circumstances in which values are selected and transferred by and between the concerned people as well as the role of each of them. Furthermore, the system is concerned with how their environments affect the values. The value system is comprised of four key elements, namely influencer, audience, values and the incubating environment. The influencer is the sponsor who takes responsibility for the people influenced by him. He/she is the core and in full control of this system. He chooses the values and forms a system out of them. This system is impacted by the context in which it exists and the environment where the influencer and the audience live.

The influencer transfers values of all sorts to the people influenced by him/her, i.e. his/her audience, using various methods and techniques. Collectively, the values form a value system, which is impacted by the environmental context of the area where its adopters live. Furthermore, the system is named after its context such as the family, educational, corporate, social, national or international values. The core and essential element of the value system is the influencer who is at the helm and who may be any figure including a parent, teacher, director, leader or ruler. In addition, such a person influences himself. He chooses the values and forms a system out of them. He enables such values to affect his audience for whom he takes responsibility. He controls the environment in which they live. For this purpose, we elaborate on our understanding of values and classify value types and systems based on the individual-supporting environment. 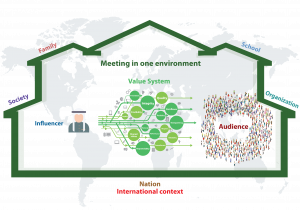 Our philosophy relates to the end goal of research, study and work, which is instilling and enabling values among individuals, institutions and the society. Since we have yet, to the best of our knowledge, to find a comprehensive scientific project that implemented this massive undertaking, we have developed a theoretical philosophy to help us realize our goal. The first component of this philosophy is forming the umbrella governing principles. Afterwards, we drafted the value and relevant terminologies. We differentiated between an influencer, whether responsible or irresponsible, and the audience. We also distinctively categorized the values and their relevant systems based on the supportive environment basis. We elaborated on the dimensions of each value. Convinced that forming values is an extensive holistic process, we will cover in the second section a preview of the value-forming methodology on the premise of our understanding and interpretation of values. 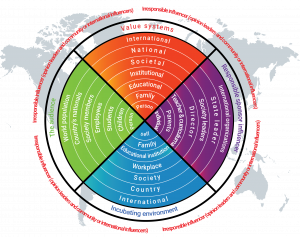